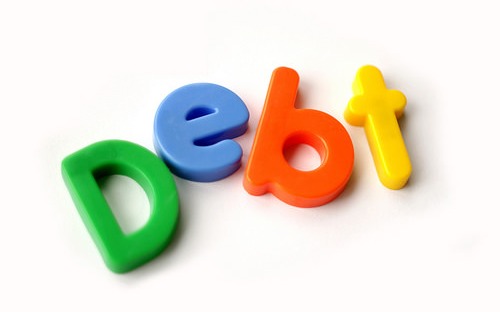 Money disputes is one of the leading causes for divorce.  My husband and I have definitely had our fair share of arguments in this category.  I have always been a penny-pincher, while Randy is more of a free spirit.

When we married in 2004, we each contributed student loan debt.  I brought along $15,000 and Randy had about $50,000.  Randy was previously married with three daughters {you can read our family background here}. Factor in an enormous amount of child support with two measly teacher salaries = we were barely making it.   I was good with money, but I had never done a true budget.  Plus, there wasn’t much to budget anyway. I remember one instance when we only had $0.10 in our bank account and the next paycheck wasn’t coming for three more days.

The $65,000 student loan debt seemed overwhelming.  So, we did what any overwhelmed person does.  We slept in a “comfortable” bed of denial.  It was something we tried not to think about . . . it would be paid off someday . . . Plus, we even saw a financial adviser who encouraged us not to worry about our student loans and mortgage because those were “good debts” to have.  This seemed to give us permission to stay in denial.

Fast forward a couple years.  Randy and I each went back to school to earn a master’s degree. We decided to defer his loans so we could pay for his graduate school in cash. I continued paying the minimum payment on my loans, which was only $100/month.  That seemed doable.

Fast forward a few more years.  Randy finished graduate school {yay!}, which meant the time had come to start paying on the old student loans {ew!}.  I honestly had not looked up the balance one single time since the deferment.  There are no words to describe the pit in my stomach when I opened up that statement.

$26,000 more than the original balance. That’s what happens when interest accrues daily at 5.25%.  The $26,000 wasn’t from buying a car or a lavish vacation.  It was just stupid interest building while we didn’t pay a dime on the loans.

Fast forward another year.  We were still fairly in denial about the debt.  We faithfully paid the minimum payment {which was $399.06/month!}, but again, I never checked the balance.  After twelve months, we finally got a statement in the mail.  A year’s worth of payments was $4,788.72, so I figured I’d see a decent reduction to the balance.

Seriously!?!?!  Where was all our money going?

Let’s do the math:

We felt completely hopeless.  At this rate, it was going to take us over 30 years to pay off this debt {not exaggerating}.  Not to mention I still had over $7,000 left on my student loans—making our total debt over $82,000 {NOT including our home}.  It seemed like we were just going to be stuck paying $400/month forever.  Do you know how much money that will equal after 30 years?

Once again, we went back into denial mode.  It was better not to think of it—if I did, I would start to cry . . . or start licking Nutella straight out of the jar.  {I’m an ugly crier and Nutella is delicious, so . . . I usually opt for the latter.}

During the summer of 2013, Randy and I had a mature disagreement about finances {read: knock-down-drag-out screaming match}. At the end of the “discussion,” he suggested we take the Financial Peace University class by Dave Ramsey {aka FPU}.  I had heard about this, but knew very little.  At this point, it seemed like the class was our last hope. When looking for a class in the area, to our surprise we found out our own church was offering it.  Coincidence? We signed up and started that September.

Y’all.  Financial Peace University changed our lives and our marriage.

During the first session, Dave Ramsey explained the 7 Baby Steps.  The concept honestly sounded scary at first because it meant changing our “comfortable” habits, no more debt-denial, and completely reallocating our money {in some radical ways}.  After crunching the numbers, doing it “Dave’s way” meant we could pay off our $82,000 in student loans in just FIVE YEARS.

Regarding money, for the first time in our marriage we were in agreement and had hope. There was a glimmer of light at the end of that long, dark tunnel.

In just five months we paid off all my student loans.  At the previous rate we were going, that would have taken us six years!

We were able to do this by simply reallocating our money.

After paying off my loans, we started throwing all that extra money toward Randy’s.  Even though the debt snowball helped us gain major momentum, we still felt a heavy burden. There is a reason the Bible says, “The borrower is slave to the lender” (Proverbs 22:7). Our financial adviser was wrong.  There is NO such thing as “good debt.”  I don’t care if we get a tax exemption or not.

We needed to get this paid off ASAP.  The only way this was possible was to start making more money and get even more intense.  In addition to teaching, I started supervising more detentions and ACT tests on Saturday mornings; Randy gave plasma and worked on friends’ cars.  Then in January of 2014, I launched my teeny tiny cake pop business called Bondbons, and Randy started Promise Painting & Contracting, LLC in February of 2015. Just about every bit of our net income from our businesses goes to the student loans.

To everyone who has ever purchased a bondbon or hired my husband to paint—you are helping us chip away at these chains that have us in financial bondage—for that, we are eternally grateful.

Mathematically, it’s not possible at our current rate, but I have faith we will meet this goal.

When we first started this journey, I had an inner battle.  Before FPU I had been convicted about giving.  I’ve tithed since I was a little girl {and we still faithfully tithe now}, but I wanted to do more in terms of both time and money.  Something I struggled with is the fact that I am putting forth so much time, energy, and money toward this debt—it’s depleting me of my resources.

Debt is paralyzing.  It keeps you from investing in a better life for you and your family.  It hinders you from being generous—outrageously generous.  I want to volunteer more at my church, serve the homeless, and go on missions trips. My ultimate goal is to live on half my income someday and give the other half away.

Debt takes all that away from me.  Sure, I could do a little of those here and there, but if I got over this debt-hurdle in just a few short years, just think of all the freedom I would gain for the rest of my life!  I would have my time, energy, and money back to give above and beyond in the name of Jesus.

Let’s do a little math again.

Above I explained that if we paid just the minimum payment of $400/month toward the student loan debt, it would take us 30 years and we’d end up paying $144,000.

What if we could take that $400/month and invest it instead?  Over the course of 30 years, $400/month in a growth stock mutual fund at 8% compound interest would turn into $547,784—almost four times in the opposite direction.

That is why Randy and I each put in 70-80 hour work weeks and still drive old cars.  That is why I roll cake balls until my hands feel like they are stricken with arthritis and why I get up early on Saturday mornings.  That is why I run on five hours of sleep a night, wear old clothes, and eat Ramen noodles like a poor college student.  That is why I blog and share not only this story but all the everythings with you.

This intense debt-free journey, too, shall pass.

8 thoughts on “Our Debt-Free Journey”